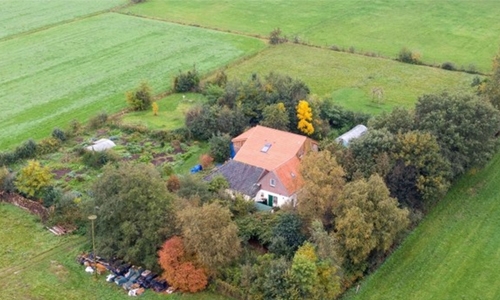 Dutch police found a father and six adult children hidden in the basement of a remote farmhouse where they had reportedly spent years “waiting for the end of time”, officials said yesterday. They discovered a man, believed to be the father of the family, and his children aged between 18 and 25 near the village of Ruinerwold in the northern province of Drenthe.

Local media said the family were found after one of the sons went to a nearby pub in a confused state, drank five beers and then asked for help, saying he had not been outside for nine years. Police arrested a 58-year-old man at the scene for failing to cooperate with the investigation, but he was not the father. “I have never come across anything like this before,” local mayor Roger de Groot told a press conference.

“Police investigated after receiving a tip-off from somebody who was concerned about the people’s living conditions” and discovered the adults, de Groot said. “They lived an isolated lifestyle,” he said, adding that they had been living on the homestead for the past nine years and several of the children “had not been taken up in the birthing register” or officially registrated.

Many questions were unanswered and police are investigating “all scenarios”, the mayor added. The family meanwhile had been taken to a nearby holiday park while the investigation continued, reports said.

‘Living in a basement’

Local news station RTV Drenthe, which first reported the story, said the family “have been living in a basement for years, waiting for the ‘end of times’.” Some of those freed “had no idea that other people existed,” the station added. Police were alerted after a man of around 25, believed to be the family’s oldest son, walked into a village bar on Sunday evening.

The dishevelled man, unwashed and wearing old clothes said “he has not been ‘outside’ for the past nine years,” bar owner Chris Westerbeek told RTV Drenthe. “He said he’d never been to school and seemed very confused. He spoke in a childish way,” said Westerbeek. The man told Westerbeek he ran away from home and urgently needed help, “so I phoned the police.”

Upon investigation police discovered a hidden staircase behind a cupboard leading to a cellar where a man said to be the family’s father and five others, believed to be his children, were hiding. Aerial photos showed a remote farmhouse surrounded by fields. The family had no contact with the outside world and were completely self-reliant with a vegetable garden and a goat, RTV Drenthe said.

“The father had a stroke a few years ago and was lying in bed. There was no sign of his wife,” RTV Drenthe reported. Neighbours told the station they did not know the family and they only knew that one man lived on the premises. Police declined to give further details when contacted. “All scenarios are being investigated. At this point we cannot give further information,” local police said on Twitter.