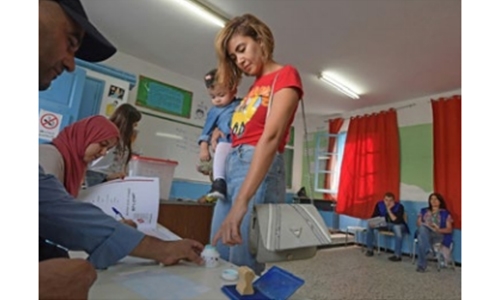 Tunisians voted yesterday in a presidential runoff pitting a conservative academic against a media magnate fresh out of jail, reflecting a shift in the country’s political landscape. The political newcomers swept aside the old guard in the first round, highlighting voter anger over a stagnant economy, joblessness and poor public services. “There is a lot of unemployment, so we need a president who works hard for the economy,” said Ibdisseme Adaili, who cast her ballot in the capital Tunis.

Adding controversy and suspense to the contest, presidential contender Nabil Karoui only walked free on Wednesday, having spent more than a month behind bars on suspicion of money-laundering. The poll, Tunisia’s second free presidential election since the 2011 revolt, follows the death of president Beji Caid Essebsi in July. Exit polls are expected on Sunday evening and official results by Tuesday. In one polling station, voters said they were divided between “the one who will apply the law” and the one “who helps the poor,” referring to a charity television show that boosted Karoui’s popularity.

“Today is a chance to recover our Tunisia, the modern Tunisia that is for women... not the Tunisia that frightens us,” said Karoui after casting his vote in Tunis. Some Tunisians organised car-sharing and free transport for students who have to travel far to their hometowns to cast their ballots. “I am doing it out of love for my country. I support the one who embodies hope for Tunisia,” said taxi driver Bakri who was offering free rides to Saied supporters between Tunis and the coastal city of Nabeul.

At the Ban Alouia terminal in Tunis, 35-year-old Reda joined the crowds to catch a bus to his hometown of Kabylie, 450 kilometres (280 miles) away. “It is important to vote... it is a duty. The two candidates are very different. One could help the country advance, the other sink it,” he said. The runoff outcome remains uncertain, with a ban on opinion polls, but Karoui received a boost with his newly formed party, Qalb Tounes (Heart of Tunis), coming second in legislative elections a week earlier.

Saied topped the first round in the presidential election, held on September 15, with 18.4 percent of votes, while Karoui followed with 15.6 percent. Nearly half of eligible voters cast their ballots in that round. Officials said turnout in the runoff was 17.8 percent by noon, higher than at the same time during the first round.