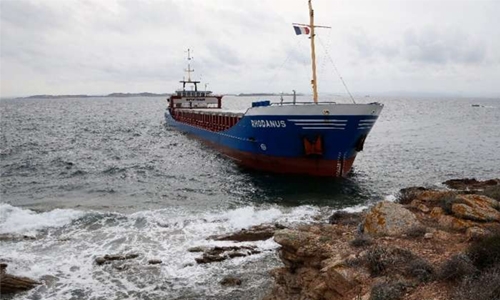 A 90-metre (295-foot) cargo ship ran aground yesterday in a pristine marine reserve in the Strait of Bonaficio off the French Mediterranean island of Corsica, but no oil appears to have been spilled, maritime police said. The Rhodanus, transporting 2,650 tonnes of steel coils and seven crew, ran into trouble in the Mouths of Bonifacio nature reserve in the early morning hours after missing an opening in the strait, the authority said in a statement.

The captain “did not turn in time and headed straight for the coast despite repeated calls” for nearly an hour from traffic controllers in Corsica and nearby Sardinia, it said. The ship got lodged in sand without tilting, and does not appear to have shed any oil, according to the statement. But anti-pollution measures are being deployed as a precaution.

“The ship is stuck in the middle of the islands of the Natural Reserve of the Mouths of Bonifacio in a protected area that is environmentally very sensitive,” the reserve’s director JeanMichel Culioli said at the scene. “It (the ship) should never have been there. We remain vigilant,” he added.

The reserve, stretching over 80,000 hectares, is the largest in mainland France, a scuba divers’ paradise with several small islands in the strait separating French Corsica from Italian Sardinia. The authorities have prohibited any ships or other nautical activities in a one-kilometre (0.6-mile) radius of the stranded ship.