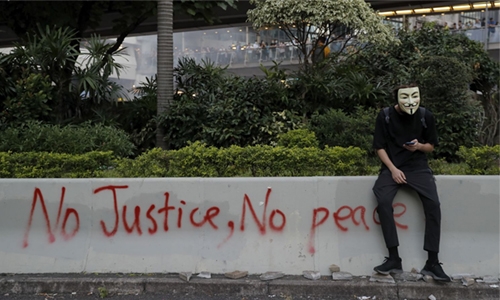 Hong Kong’s leader invoked colonial- era emergency powers yesterday to ban protesters wearing face masks, but the move aimed at quelling months of unrest sparked immediate rallies, widespread clashes and vows to defy the new law. Chief executive Carrie Lam said she had made the order under the Emergency Regulations Ordinances, a sweeping provision that grants her the ability to bypass the legislature and make any law during a time of emergency or public danger.

It is the first time the law has been used in 52 years. “We believe that the new law will create a deterrent effect against masked violent protesters and rioters, and will assist the police in its law enforcement,” Lam said. As soon as the ban was announced, widespread protests broke out across Hong Kong.

Large crowds of mostly office workers blocked roads in the heart of the commercial district. Some protesters tore down pro- China banners, before clashes erupted throughout the evening as police used tear gas in multiple locations to disperse protesters who had taken over roads, vandalised subway stations, set street fires and trashed pro-China businesses. In the northern district of Yuen Long, a plainclothes police officer was surrounded in his car and attacked by protesters, a petrol bomb exploding at his feet.

Social media reports said a shot was fired but police would not confirm this. The entire subway network was also suspended, leaving protesters, locals and Friday night revellers stranded. Online forums used by protesters filled with anger and vows to hit the streets over the upcoming three-day weekend. “Youngsters are risking their lives, they don’t mind being jailed for 10 years, so wearing masks is not a problem,” a 34-year-old office worker wearing a surgical mask, who gave her first name as Mary, said.

‘The last time the law was invoked was during the 1967 riots -- a period where more than 50 people were killed in a year-long leftist bombing and murder spree. Hong Kong’s protests were ignited by a now-scrapped plan to allow extraditions to the mainland, which fuelled fears of an erosion of liberties promised under “one country, two systems”.