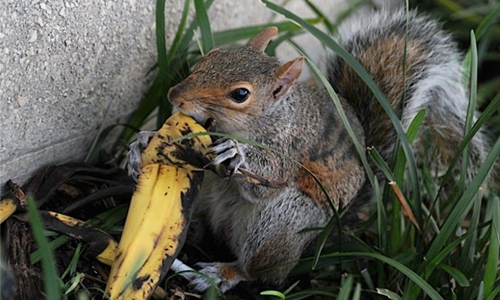 Next time you toss a banana peel or apple core on the ground believing you’re feeding nature, you may want to think twice. That’s the appeal issued this week by rangers at Glacier National Park in Montana -- one of the country’s most famous parks -- who urged visitors not to leave food waste behind.

“These ‘natural’ food items will not decompose quickly,” the rangers said in a Facebook post shared at least 50,000 times by Friday. “If animals don’t eat the food waste, decomposition will likely take much longer than you expect. “Some fruit products can take years to decompose depending on the environment they are in!” A banana skin, for example, can take two years to degrade while an apple core can take eight weeks.

The rangers added in their post -- entitled “Myth Busters Banana Peel and Apple Core Edition” -- that so-called natural food items are “usually not so natural” as they may not be native to the area where they are discarded. “If eaten by wildlife it will likely not digest well since these animals are not accustomed to these foods,” they wrote.

“Fruit and vegetable seeds that end up on the ground could result in a non-native plant growth. “Last but not least, no one wants to see your food waste decomposing on their visit to a pristine national park.”

What will be at the end of the magnet?