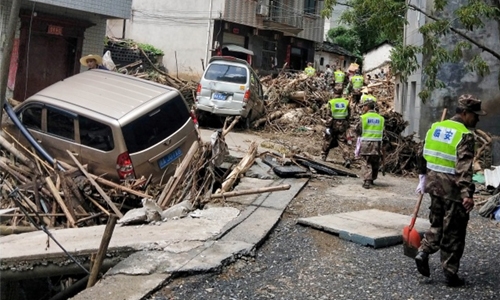 Nine people have died and 35 are still missing after a series of mudslides in an autonomous region of China’s southwestern Sichuan province, local authorities said yesterday. A 33-year-old firefighter was among those killed by a flash flood that tipped over an emergency response vehicle as they went to help people affected by a mudslide in Wenchuan county, according to local officials.

State news agency Xinhua said another firefighter was receiving emergency treatment, citing Sichuan fire and rescue authorities. Six more people have been reported injured and more than 100,000 people have been evacuated from Wenchuan in the mountainous Aba Tibetan and Qiang Autonomous Prefecture.

The mudslides and torrential rainfall cut off water and power supplies to thousands of homes, as well as damaging bridges and blocking roads linking local towns with Chengdu, the capital of Sichuan. Local authorities said they had also sent 20 buses and two helicopters to evacuate tourists from the popular holiday region.

Xinhua said that one mudslide had damaged a waterworks and flooded the plant connected to a local hydroelectric dam and that search and rescue efforts are still underway.