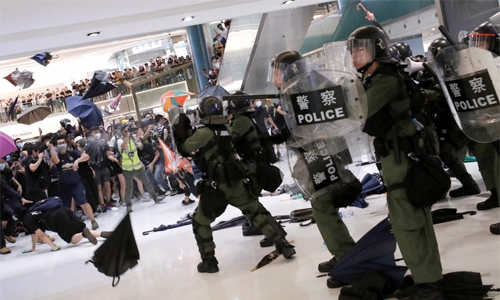 Anti-government protesters who fought police inside a Hong Kong shopping mall were “rioters”, the finance hub’s pro-Beijing leader said Monday, as she threw her support behind the city’s beleaguered police force following another weekend of clashes.

Hong Kong’s ongoing political crisis deepened further on Sunday as riot police and protesters fought running battles inside a shopping complex packed with luxury stores. Police used pepper spray and batons against small groups of protesters, who responded by hurling umbrellas, bottles and other projectiles, in a night of fresh violence.

Officers and protesters were injured in the chaotic melee which left bloodstains on the floor and at least 28 people needing hospital treatment. City leader Carrie Lam rounded on protesters after visiting injured officers Monday. “They were committed to the duties, and also very professional and restrained.

But they were wantonly attacked by rioters -- I think we can really describe them as rioters,” Lam told reporters. Lam said police and prosecutors will press charges following investigations.