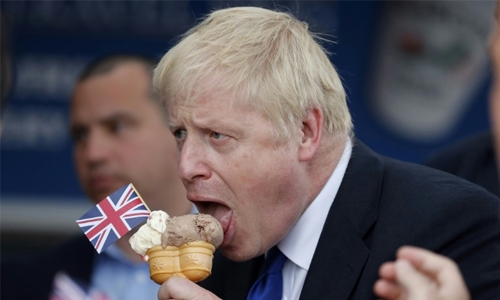 There is a long charge sheet against Britain’s Boris Johnson but among Conservative party activists who will choose the country’s next prime minister, Brexit appears to trump everything. The former foreign minister and ex-London mayor is accused of lying, incompetence and using divisive rhetoric, and also faces questions over his colourful private life.

But he led the campaign to take Britain out of the EU in the 2016 referendum and his promise to deliver on that vote, come what may, has made him the runaway favourite now to take power in Downing Street. “Boris has a following in places a long way from London where people are very cross that they’ve voted for Brexit and it hasn’t happened,” said biographer Andrew Gimson. Prime Minister Theresa May will step down this month after failing to get her EU divorce deal through parliament, twice delaying Britain’s departure date.

Johnson is vying with current foreign minister Jeremy Hunt to replace her, with the winner elected by 160,000 party members of the ruling Conservatives. Both candidates say keeping the latest Brexit deadline of October 31 is a priority, even if that means a disorderly “no deal” departure. Tory members are clear about what they want. A YouGov survey last month found 54 percent would sacrifice their party to ensure Brexit happens, and 61 percent would even accept significant damage to the economy.

But another YouGov poll this weekend found that while 90 per cent believed Johnson would follow through on his “no deal” threat, only 27 percent thought the same of Hunt. The same survey found 74 percent backed Johnson for leader. “Boris is seen as the true Brexiteer who will take Britain out without a deal,” said Anthony Wells, YouGov’s director of political and social research.

Despite his strong lead from the start, some in Johnson’s team feared the politician with a reputation for unpredictable behaviour might do or say something that would ruin his chances. He limited his media appearances during the early stage of the leadership campaign, but that led to accusations that he was ducking scrutiny over his Brexit plan, which critics say remains vague.

Johnson has also faced fresh questions over his love life after police were called to the home he shares with his girlfriend following a row. But at a Conservative party meeting in Birmingham shortly after that story broke, many activists dismissed the scandal. “What’s important is what’s this guy going to be delivering for you in Brexit,” said 23-yearold technology analyst Hasnain Ahmed.

Others highlighted Johnson’s charisma and wit, which make him stand out among other politicians. “Boris didn’t answer the questions very well, but on the other hand Jeremy Hunt was quite boring,” said Richard Tasker, vice-chair of a local party association who is backing Johnson.

Trading on past glories

Johnson’s supporters are also backing him as the best man to lead the party if the Brexit deadlock results in an early election. They say he can reach beyond the Conservative base, noting he was elected twice as mayor of cosmopolitan, liberal London.

But the Brexit campaign that Johnson led in 2016 was deeply divisive with its focus on limiting migration and its exaggerated claims about the cost of the EU. Last August, he also caused an uproar with an article suggesting that veiled Muslim women look like “letter boxes” -- even if the rest of the piece defended the right of religious dress.

In painting himself as a national vote winner, Wells said Johnson is “trading on past glories”. But he added: “That doesn’t take away the charisma, and just because he’s not popular now, many people think -- he did it before, he might do it again.”