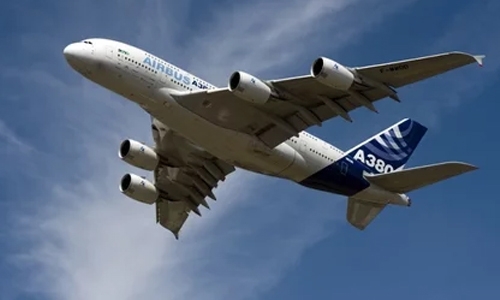 European aircraft maker Airbus will ask airlines operating 25 of its oldest A380 super-jumbo jets to inspect their wings after cracks were found in some models, the EU’s Aviation Safety Agency said. The EASA said in an airworthiness directive dated July 5 that “occurrences have been reported of finding cracks” in certain parts of the wing on in-service A380 aeroplanes.

“This condition, if not detected and corrected, could reduce the structural integrity of the wing,” the EASA said. “To address this potential unsafe condition, Airbus plans to issue the SB (service bulletin) to provide inspection instructions.” The directive does not yet ground any aircraft for the moment.

The French daily Les Echos reported that the EASA, which is based in Germany, advised ultrasonic testing on 25 of the 234 A380 aircraft in operation, notably those built more than 15 years ago. “This airworthiness directive is considered an interim action, limited to the 25 oldest wing sets,” the EASA said.