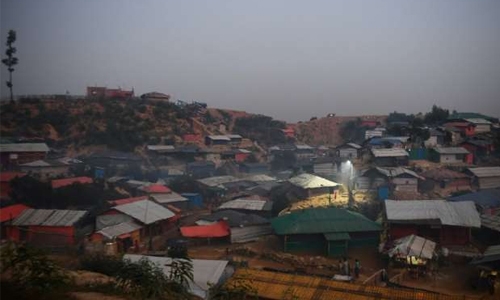 Twenty-three teenage Rohingya girls were rescued after being brought from refugee camps to the capital Dhaka to be sent to Malaysia by air, Bangladesh police said yesterday. Dhaka police also arrested four human traffickers including a Rohingya couple and recovered over 50 Bangladeshi passports from them on Saturday.

Police spokesman Mokhlesur Rahman said they raided a residence in the northern part of the city and found the teenagers hiding in a room behind a tailoring shop. “They were promised jobs in Malaysia and brought from refugee camps in Cox’s Bazar,” he said, referring to the Rohingya settlements in Bangladesh’s southeastern coastal district.

The girls -- aged between 15 and 19 -- could have been potential victims of forced prostitution, the official said. “We have filed cases against the four arrested persons and sent the girls back to their camps in Cox’s Bazar,” Rahman said.