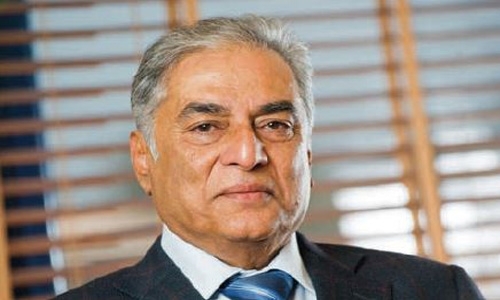 Under the Leadership of His Majesty King Hamad bin Isa Al Khalifa and HRH Prince Salman bin Hamad Al Khalifa, the Kingdom of Bahrain will move to a new age of prosperity.

His Royal Highness Prince Salman is a visionary leader and on the occasion of taking the new responsibilities, I’m sure that he will elevate the status of the Kingdom to new heights.

I am happy and proud to say that HRH Prince Salman has put up Bahrain on the road to future economic success, which will impact society more widely, with his vision.

I would like to say that the Formula One, which was the brainchild of HRH the Crown Prince, brought the Kingdom in the limelight in the international sporting arena.

I would like to stress that the success of the F1 mirrors HRH Crown Prince and Prime Minister’s directives and vision, which has placed Bahrain internationally as a role model for the organisation of various sporting events.

During the last so many years, Formula One had a tremendous impact on the economy of Bahrain with so many dignitaries visiting the Kingdom.

His Royal Highness Prince Salman bin Hamad Al Khalifa visited India on many occasions during which I was privileged to accompany.

I would like to express my appreciation to the Kingdom’s Leadership in ensuring the safety and wellbeing of the Indian community in the Kingdom.

I still remember how HRH the Crown Prince appreciated the efforts of the entire Indians during the time when the nation faced challenges.

As a business entrepreneur, we always like to promote Bahrain.

On the occasions of HRH the Crown Prince assuming responsibility as the Prime minister of the Kingdom, I would like to extend my best wishes, health and happiness to the Leadership and the people of Bahrain.