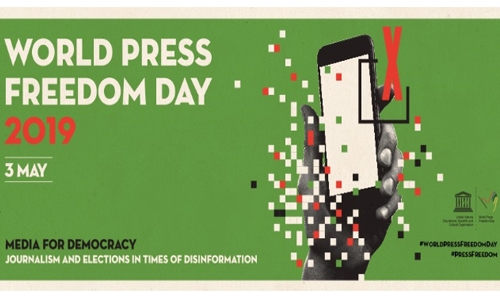 The United Nations is celebrating World Press Freedom Day on May 3, 2019 under the theme ‘Media for Democracy: Journalism and Elections in Times of Disinformation’. World Press Day is an opportunity to celebrate the fundamental principles of press freedom; to assess the state of press freedom throughout the world, defend the media from attacks on their independence and pay tribute to journalists who have lost their lives in the line of duty. The UN position is that media freedom and access to information feed into the wider developmental objective of empowering people.

Empowerment is a multi-dimensional social and political process that helps people gain control over their own lives. This can only be achieved through access to accurate, fair and unbiased information, representing a plurality of opinions, and the means to actively communicate vertically and horizontally, thereby participating in the active life of the community. The United Nations also believes that the media plays a critical role in supporting public dialogue and enhancing knowledge on ways to support sustainable development and achieve the SDGs.

Taking this into consideration, the UN launched the SDG Media Compact to raise awareness of the Goals, to help galvanize further action, and to help support governments to achieve the Agenda 2030. The United Nations considers media as one of the effective tools to disseminate and raise awareness about development concepts, particularly regarding the 17 United Nations Sustainable Development Goals and their main pillars: People, planet, prosperity, peace, partnership. The focus of peace is what the media can support and strengthen; Media can mobilize the international community to end conflicts and wars. Development cannot be achieved without peace, and vice versa.

This is underlined by SDG 16, which aims to promote universal access to justice; and to build effective, accountable and inclusive institutions and to ensure that the public has access to the right information which is instrumental in protecting their fundamental freedoms. The press corps - with all its institutions and journalists - has a major role to play in delivering information or news to all of us. It is required to provide the community, local and national government, the private sector and civil society and parliaments with sound and accurate information and analysis.

Any misinformation will have a negative impact. As we celebrate the World Press Freedom Day, the world is still facing two main persisting challenges exists: first, the freedom of speech to reveal the facts and the right to access information, and second, journalists’ safety and protection. According to UNESCO, almost one hundred journalists were killed in 2018, while hundreds more are imprisoned. When media workers are targeted, societies pay a price. The UN Secretary General Antonio Guterres has expressed his deep concerns at the growing number of attacks and the culture of impunity.

The role of the press cannot be carried out without the support of governments, in line with national legislations and international conventions. In this context, we in Bahrain witnessed the great role of the media during the 2018 elections in the Kingdom of Bahrain, the governmental facilities provided to the workers in this field; the wide coverage of the events locally, regionally and internationally, especially as it recorded a historic achievement for Bahrain where 6 women secured seats in the Parliament. Social Media also played a great role because of the popular interest in the event, and the candidates’ social media platforms were used very effectively to provide all needed information to all.

Sharing of information in Bahrain during the election period has been characterized by equal and balanced media coverage for female and male candidates, as well as sharing of information and analysis which helped the electorate to identify their candidates in a transparent and fair manner and to give the electoral the ability to choose. Here we quote the UN Secretary-General’s when he said: “No democracy is complete without access to transparent and reliable information.

It is the cornerstone for building fair and impartial institutions, holding leaders accountable and speaking truth to power”. On this day I would like thanks the journalist and media personal in Bahrain for their work and dedication and wish them and their families a blessed Ramadan.