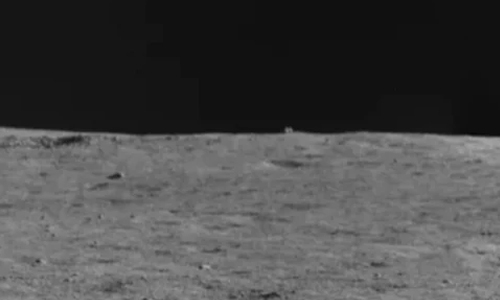 China's Yutu-2 rover, which has been exploring the far side of the moon since early 2019, was recently sent to investigate a mysterious cube-shaped object that was spotted on the northern horizon.

Andrew Jones, a journalist who covers the Chinese Space program, shared the rover updates via a series of tweets on Friday.

In the first tweet, he wrote that Yutu-2 captured an image of the cubic-shaped object on the northern horizon, that was 80m away from the rover in Von Kármán crater.

In a follow-up tweet, he wrote the object seen in the grainy image was not an obelisk (a tapering stone pillar) or aliens.

"So yeah, it's not an obelisk or aliens, but certainly something to check out, and hard to discern much from the image. But large boulders (right) are sometimes excavated by impacts, as seen by the Chang'e-3 mission, which launched 8 years ago on Dec 1," the follow-up tweet read.

In another tweet, Jones a drive diary image to explain how the rover and the drive team navigated between craters as it made its way northeast from the landing site

According to reports, researchers were stoked by the cube-shaped structure which was estimated to be around 80 metres away from the Yutu-2 river when the photos were taken.

As the rover gets closer, it will be able to take better pictures for experts to understand the true nature of the object. Many have reckoned its boulder as the surface of the moon is marked with impact craters.

This isn't the only strange thing the Yutu-2 rover discovered since 2019. In the early days of its expedition, it discovered a 'gel-like substance on the bottom of an impact crater. But it turned out to just rock.

The Yutu-2 rover made a soft landing on the far side of the moon using the  Chang'e-4 lander in 2019.

Jones went on to inform his followers that Yutu-2 and Chang'-4 lander had completed their 37th lunar day of activities.

Why you should still try to avoid catching Omicron

Who won what at the Golden Globes awards 2022?