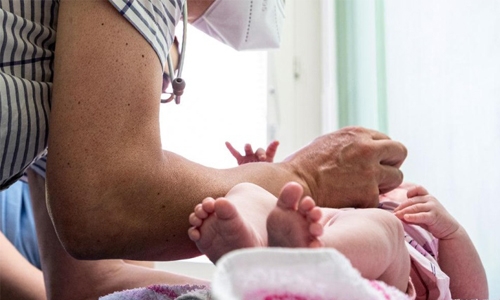 Many predicted the Covid-19 outbreak would lead to more people having babies, but in fact, couples often decided to delay becoming parents. Researchers now wonder whether this will have a long-term impact on population growth or if a spike in births is ahead.

Early in the pandemic, there were predictions that stay-at-home orders would spawn a baby boom.

“Nine months after folks are forced to hunker down and ride out a natural disaster, the birth rate suddenly spikes,” explained an article on Fatherly, a parenting news website. “Whether it's boredom... or the sense of impending doom, there’s something about these situations that makes people do what comes naturally,” according to Deutsche press agency (dpa).

This summer, Fatherly ran a sequel titled, “The COVID-19 Baby Boom is a Lie.”

But it isn’t a lie. In the Philippines and other poor countries where families were already struggling to make ends meet, lockdowns did cause a spike in pregnancies, largely because women were unable to access birth control.

The pandemic has had profound impacts on pregnancy and birth rates, as well as birth outcomes, and the long-term consequences could ripple through economies, education systems and more. The thing is, some effects have defied expectations, and some are hard to explain.

For example, the premature birth rate declined last spring and summer — around the world. Vincenzo Berghella, director of maternal-fetal medicine at Thomas Jefferson University Hospital, was one of the first to document the phenomenon, using data from his hospital. One possible partial explanation: telemedicine visits eliminated frequent, inconvenient, time-consuming treks to the obstetrician’s office, which lessened expectant mothers’ stress.

“You’d think the in-person care which we’ve been doing forever is beneficial, but maybe not in some ways,” Berghella said in an interview. “The bottom line is we don’t know why preterm births declined, but most people say this is real. It has been shown in Europe and Asia, as well as the US.”

But this unexpected pandemic benefit has socioeconomic nuances, researchers at the University of Pittsburgh Medical Center found. At UPMC Magee-Womens Hospital, the rate of births before 37 weeks of pregnancy declined by a percentage point among white women and those living in affluent neighborhoods, but not Black women.

US fertility indicators — the annual birth rate and lifetime births per woman — have been falling fairly steadily for decades.

Meanwhile, deaths have outpaced births in many parts of the US. In 2019, before the pandemic hit, deaths exceed births in almost half of US counties, and the nation added just 892,000 people, the lowest population growth in a century, according to an analysis by University of New Hampshire demographer Kenneth M. Johnson. This trend was pronounced in farming, mining and older industrial regions, as well as in counties with lots of elderly residents.

In 2020, population growth shrank even more. The US added 229,000 people, reflecting the tsunami of pandemic deaths, and diminished immigration, Johnson’s updated snapshot found.

But 2020 was marked by another anomaly: A sudden, sharp decline in women getting pregnant.

At the height of pandemic restrictions in late March and early April, more than 310 million Americans were stuck at home. Modified shutdowns persisted in many places for a year. Grappling with economic hardship and zoom schooling, many couples decided to forgo, or at least postpone, reproducing.

To help with that prediction, the authors, economists Melissa Kearney and Phillip Levine, extrapolated from two historic crises. During the Spanish Flu pandemic of 1918-19, birth rates dropped sharply with each of the three big waves of deaths. During the Great Recession of 2007-2009, the birth rate decreased correlated with increases in unemployment.

“An analysis of the Great Recession leads us to predict that women will have fewer babies in the short term, and for some of them, a lower total number of children over their lifetimes,” the authors wrote.

The short- and long-term distinction is important. If the rate of pregnancies this spring is inflated by pregnant women who postponed because of the pandemic, then not only could there be a rebound in births later this year, but a big spike. On the other hand, there might not be a spike, depending on how many women who postponed discovering their biological clocks have run out.

If a University of Michigan study published last month in JAMA Network Open is a guide, there will be a spike.

Researchers in UM’s department of obstetrics and gynecology analyzed electronic medical records and found the average weekly number of new obstetric patients fell from 131 in March through June 2019, to 122 during the same months in 2020 — when Michigan was under shutdown orders. Based on the decline in pregnant patients, they projected a 16 per cent decline in deliveries from December 2020 through April 2021.

When those months actually came around and the delivery projections were accurate, the researchers made a new forecast. Based on the number of new obstetric patients this spring, the volume of births this summer and fall will not only rebound, but be 15 per cent above normal — a temporary baby blip, if not a boom.

“Pandemics and other major society events alter population dynamics,” wrote the authors, led by maternal-fetal medicine specialist Molly J. Stout. “Population dynamics are of interest for governments, businesses, and economists because fluctuations in young and aging, workforce, and school-aged populations are critical variables in the ability to plan for social well-being.”The UM study, like others, also found a marked decline in preterm births.

Berghella, at Jefferson, said this surprising silver lining opens a whole new avenue for studying ways to prevent the mysterious, intractable problem that is the leading cause of newborn death and disability. Of course, the avenue is not well marked. Did stay-at-home orders reduce pregnant women’s smoking, driving, infections, shift and physical work? Or did restrictions lead to improvements in women’s nutrition, hygiene, exercise, family support? All of the above?