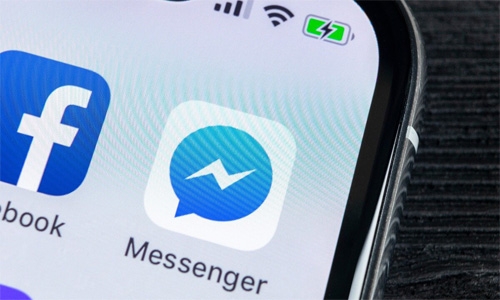 Facebook on Friday began rolling out encryption for voice or video calls made through its Messenger texting app, ratcheting up privacy for users.

The move comes as the sanctity of data on smartphones becomes an increasingly sensitive topic.

Encrypting text chats on Messenger has been an option since 2016.

The number of audio or video calls made on Messenger has surged since then to more than 150 million daily, prompting Facebook to add the option of scrambling exchanges from one end to the other to prevent snooping.

"The content of your messages and calls in an end-to-end encrypted conversation is protected from the moment it leaves your device to the moment it reaches the receiver's device," Messenger director of product management Ruth Kricheli said in a blog post.

"This means that nobody else, including Facebook, can see or listen to what’s sent or said."

End-to-end encryption is already widely used by apps including Facebook-owned WhatsApp and is becoming an industry standard.

"People expect their messaging apps to be secure and private," Kricheli said.

Facebook disclosed that it is testing encrypting group chats and calls on Messenger, as well as direct messages at its image-centric Instagram social network.

"We’ll also kick off a limited test with adults in certain countries that lets them opt-in to end-to-end encrypted messages and calls for one-on-one conversations on Instagram," Kricheli said.

Apple's recent announcement that it would scan encrypted messages for evidence of child sexual abuse has revived debate on online encryption and privacy, raising fears the same technology could be used for government surveillance.

The move represents a major shift for Apple, which has until recently resisted efforts to weaken its encryption that prevents third parties from seeing private messages.

Apple argued in a technical paper that the technology developed by cryptographic experts "is secure, and is expressly designed to preserve user privacy."

Nonetheless, encryption and private specialists warned the tool could be exploited for other purposes, potentially opening a door to mass surveillance.

FBI officials have warned that so-called "end to end encryption," where only the user and recipient can read messages, can protect criminals, terrorists and pornographers even when authorities have a legal warrant for an investigation.

UK vows not to turn back on Afghanistan despite embassy pullout