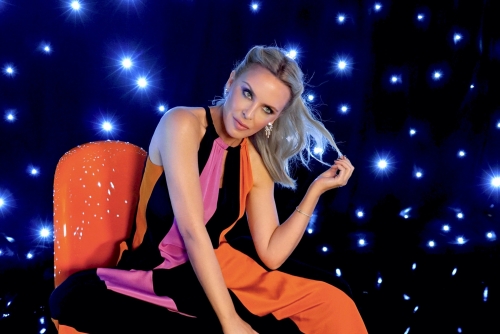 Kylie Minogue heads back to dancefloor with new album 'Disco'

Since Australian pop singer Kylie Minogue played her parents` ABBA and Donna Summer records as a child, disco music has always been a part of her.

In the new album she released last week, Minogue returns to those roots, and could make British chart history if it reaches number one.

Despite her many accolades, including one Grammy and three Brit awards, Minogue says it would be "incredible" if `Disco` - her 15th studio album - topped the charts, making her the first female solo artist to have number one albums in the UK across five consecutive decades.

"That sounds crazy to me. I`m 52 years old. So, you know, across five decades … I just find it mind blowing," Kylie told Reuters in an interview in London.

The singer, who has sold 80 million albums worldwide, says she started listening to disco music as a child.

"I would have been eight, nine, 10, you know, just getting into music, just able to play my parents` records myself...and a lot of those were disco records."

Disco "has always been in the system", she said.

"In 2018 after that my previous album, Golden, which had a country influence, I knew I`d be heading back to the dance floor. I didn`t quite know I`d be as kind of blatant as disco. But I knew I was heading that way."

Minogue co-wrote all the tracks on Disco, which was mostly recorded during the lockdown in a studio she had to set up in her home. She said she hopes the album connects with people, now and while her lead single was not written in response to the pandemic, it resonates.

"The opening lines for ‘Say Something’ are ‘we’re a million miles apart in a thousand ways’. Which, of course in 2020 took on a whole new meaning," she said