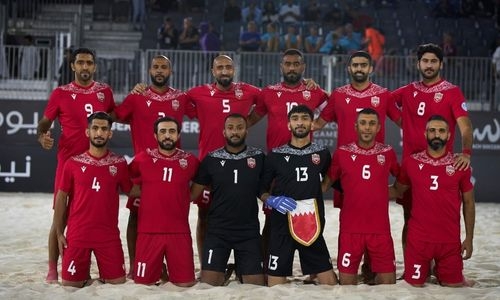 Bahrain’s national beach soccer team have been drawn in a tough group for the AFC Beach Soccer Asian Cup 2023.

The sport’s leading continental event is scheduled to take place in Pattaya, Thailand from 16 to 26 March.

The draw was held virtually from the Asian Football Confederation (AFC) House in Kuala Lumpur.

A total of 16 nations from across Asia are taking part.

They have been divided into four groups of four teams apiece.

Aside from regional glory, the top three teams will qualify for the FIFA Beach Soccer World Cup UAE 2023.

Bahrain have been drawn in Group A alongside hosts Thailand, Afghanistan and fellow - Gulf side Saudi Arabia.

The nationals are scheduled to open their campaign on the tournament’s first day against the Afghans.

They will then take on their Saudi counterparts on 18 March, after which they play the Thais on 20 March.

The top two teams from each of the four pools move on to the quarter-finals.

Bahrain were the tournament’s first-ever champions in 2006, but have not won again since.

They were the silver-medallists in the 2009 event.

The nationals have appeared in all but one of the previous championships.

After Japan won the last time the cup was held in 2019, the 2021 edition was cancelled due to the COVID-19 pandemic.