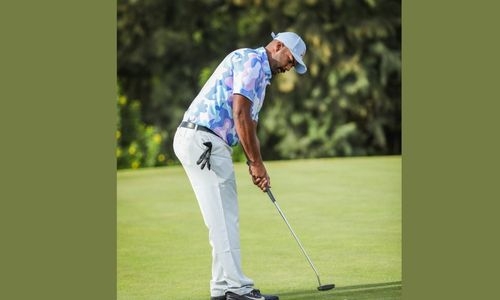 Three of Bahrain’s golfers have moved into the top 10 of the leaderboard after the second day of action in the 41st Pan Arab Men Golf Championship, being played at La Cigale Tabarka Golf course in Tunisia.

Ahmed Al Zayed, Fahad Al Hakam and Khalifa Al Merisi all had superb outings yesterday to gain their places amongst the tournament’s leading competitors, with Al Zayed moving up to seventh, Al Hakam eighth and Al Merisi 10th after 36 holes of play.

In yesterday’s second round, Al Zayed and Al Merisi each carded three-over-par scores of 75. That brought Al Zayed’s total to 156 after two days, having played an 81 in the first round.

Al Zayed shares the same total with Al Hakam, whose 79 yesterday followed an impressive 77 on Thursday.

Al Zayed and Al Hakam are now the closest two Bahrainis to the top of the leaderboard, where Elyes Barhoumi of Tunisia is in first place with a two-round total of 14—15 shots ahead.

Saaoud Abdallah Al Sherif of Saudi Arabia followed one shot back, while the Egyptian pair of Dean Naeem and Issa Abu El Ela were third and fourth, with scores of 147 and 148, respectively.

Ranked just ahead of Al Zayed and Al Hakam were Saleh Ali Al Kaabi (152) of Qatar in fifth and Baha Boulakmine (155) of Tunisia in sixth, while in ninth just ahead of Al Merisi was Abd El Moneim Shafei (158) of Egypt.

Bahrain’s Al Kaabi played a 10-over-par 82 yesterday to bring his two-day total to 167.

All four Bahrainis are back in action in the third round of the 72-hole event today.

The Arab championship is being played at the individual and team levels. In the teams’ competition, only each nation’s three lowest scores count on each day.