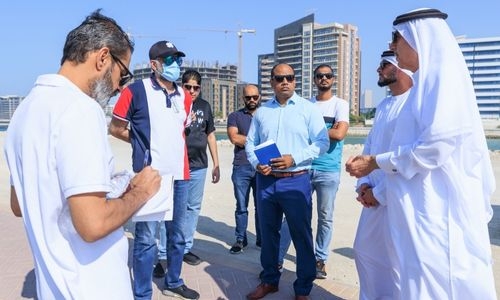 Following the directives of His Highness Shaikh Nasser bin Hamad Al Khalifa, Representative of His Majesty the King for Humanitarian Works and Youth Affairs, the organising committee of the Ironman 70.3 Middle East Championship, which will be held in Bahrain from December 7-9, 2022, and is organised by Faalyat, raised the pace of its preparations for organising this major global event, which returns to the Kingdom following a two-year hiatus due to the Coronavirus pandemic.

The tournament site near City Centre Bahrain was visited by a delegation from the organising committee, to stand on the ongoing preparations that will accompany the tournament and make full arrangements for media and television coverage of the event.

The delegation included Tawfiq Al Salehi, Director of HH Shaikh Nasser bin Hamad Al Khalifa’s Media Office and Information Centre, Ahmed Al Haj, Director of the Ironman 70.3 Middle East Championship, Hamood Al Jeeb, President of Bahrain Sports Channel at the Ministry of Information Affairs, in addition to a number of officials in the Technical and Operations Department in the Ministry of Information, and Bahrain Sports Channel.

Al Salehi expressed his gratitude and appreciation to His Excellency Dr Ramzan Abdulla Al Nuaimi, Minister of Information Affairs, for the Ministry’s constant cooperation and keenness to cover the events held in the Kingdom and highlight the Bahraini successes in organising such major events.

During the visit, Al Salehi was briefed on all the needs for media coverage of the event, and he affirmed that His Highness Shaikh Nasser bin Hamad Al Khalifa had directed to provide full support to the sports channel in order to provide the tournament with the best media coverage.