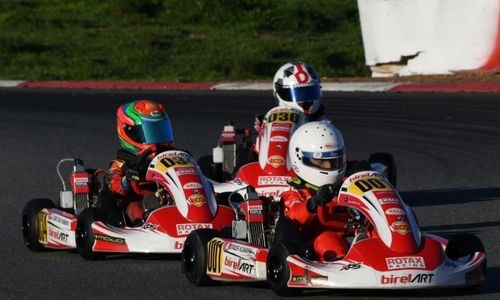 Two of the squad’s drivers have progressed to the Finals of their categories, with Muhammad Wally and Yousif AlGhaith both lining up on the grid for the main event after a week of build-up to this point.

Wally was one of the standout drivers in a very tough and competitive field of 72 Junior MAX drivers, with the top 36 progressing to the Finals.

Team Bahrain’s 14-year-old ended the day ninth best in class, with his top 10 position ensuring he has a realistic shot at the world championship title which is up for grabs on Grand Final Day.

Ten-year-old AlGhaith will line-up 24th on the Micro MAX grid featuring 36 drivers, after the Pre-Finals day in which Christopher El Feghali (Team Lebanon) held on to his unbroken streak of wins.

After four days of tricky weather, changing from wet to dry regularly, the sun shone bright for the Pre-Finals, but unlike Wally and AlGaith, four drivers will not be in action for Saturday’s finals.

For the rest of Team Bahrain in Pre-Qualifying, Khaled Najjar was 68th in the Mini MAX class, Najashi Rashdan came 45th in the Senior MAX, and Sulaiman AlKandari was 70th in the DD2.

Hasan Shehabi, BIC Commercial Karting and Team Bahrain manager, reflected on the Pre-Finals. He said: “We are proud to have two drivers into the Pre-Finals with Muhammad and Yousif to fly the flag for our team in the Grand Finals.

“Muhammad starting in the top 10 means he has a good chance for a good result, while Yousif has embraced the experience during his first Grand Finals week, which will serve him well in the future.

“As for Khaled, Najashi, and Sulaiman, they too will be richer for the experience and now know what to expect for future Rotax MAX Grand Finals and they can be proud of their efforts for Team Bahrain and we thank them for that.”