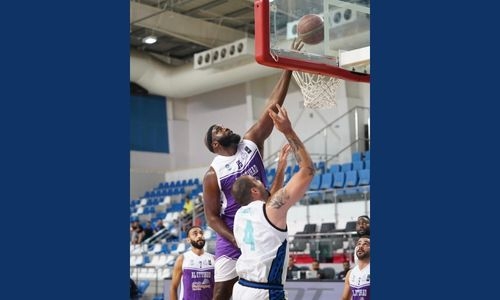 Ettihad broke the game wide open with a one-sided second quarter, in which they held Nuwaidrat to just four points while scoring 26, giving them a commanding 49- 22 lead at the half.

Nuwaidrat began the third quarter determined to fight back and began to press defensively, but Ettihad were able to match their energy and extended their lead to as much as their game-winning margin of 46.

Mohammed Ghazwan led six players in double figures for the victors with 26, including six three-pointers.

Adrian Uter added 17 and 16 rebounds, while Ali Jassim and Ahmed Ghanim scored 14 each. For Nuwaidrat, Mohayad Ameer had 19, Murtadha Salman 13 and Keanau Post 10.

Ettihad improved to a 5-2 win-loss record following the game, while Nuwaidrat dropped to 2-5.

Xavier Gibson had a game-high 29 points, 15 rebounds and five assists for Bahrain Club, while Ali Abbas added 16 and Sadiq Shukrallah 12.

With the result, Bahrain Club claimed their fourth win in eight games as they rose to the top three on the standings.

Samaheej dropped their seventh contest in eight outins and remained in the bottom half of the table.