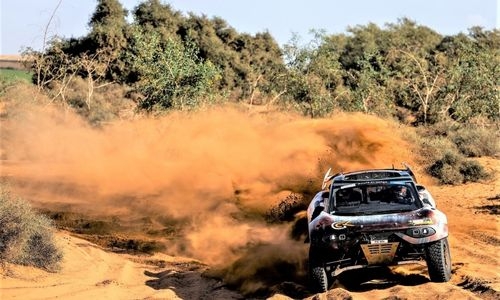 After a difficult day for Sebastien Loeb in the Rallye Du Maroc, another Frenchman at the wheel of a Prodrive Hunter announced his challenge in the third round of the World Rally-Raid Championship.

Partnered by Fabian Lurquin in his Bahrain Raid Xtreme (BRX) Hunter, Loeb was halted for 20 minutes with early technical problems on yesterday’s opening desert stage, a 316km competitive section from Agadir to Tan-Tan.

The nine-time World Rally Champion, third fastest on the previous day’s opening Prologue stage, was forced to stop to change a front wishbone after just 20km, but recovered to reach the finish and prepare for another day.

While them is fortune dropped the nine-time World Rally Champion to seventh place at the end of the leg, Guerlain Chicherit in another Prodrive Hunter grabbed third position, nine minutes 45 seconds behind the leader, Saudi Arabia’s Yazeed Al Rajhi in a Toyota Hilux.

Chicherit had disputed the lead for much of the stage in a fascinating battle with Qatar’s Nasser Al Attiyah, who ultimately completed it holding second spot in his Toyota, 3:05 secs adrift of Al Rajhi.

Argentine Orly Terranova and Spanish co-driver Alex Haro, who also had their problems on the day, still reached the end of the leg holding fourth place in their BRX Hunter.

Chicherit, enjoying his first competitive drive in the Prodrive Hunter in the colours of GCK Motorsport, had been highly impressed with the car’s performance during testing in Morocco.

He took an early lead as the rally headed south from Agadir to the desert town of Tan-Tan, on tracks rising and descending through the hills, with a flat out race along the beach, and sandy sections providing a stern navigational test.

After the Frenchman and Al Attiyah had contested the lead for the majority of the stage, it was only near the end of the special that Al Rajhi grabbed the advantage.

The Rallye Du Maroc continues today with a 315km stage from Tan-Tan to the oasis city of Laayoune.