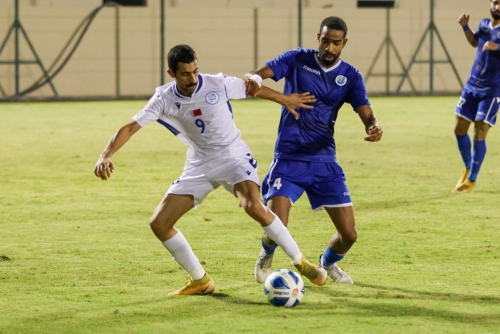 Isa Town and Busaiteen both advanced last night to the second round of this season’s His Majesty the King’s Cup in football.

Isa Town made it through following a 4-2 penalty shoot-out win over Aali in a match that was deadlocked at 1-1 at the end of regular time.

Busaiteen joined them in the ensuing phase with a 2-1 triumph against Um Al Hassam. Isa Town now move on to face Al Ettifaq in round two, while Busaiteen will be taking on Al Malkiya. Both contests are scheduled to be held on Wednesday next week.

In Isa Town’s win yesterday, on target during the match were Amangoua Kesse for Isa Town and Igor Oliveira Da Silva for Aali. Then, in the shootout, Ghanem Masaad Mohammed, Ali Khalifa Aldoseri, Kesse and Mahdi Abdulfattah were all able to find the net for the winners.

Esraa Amer and Sunday Divine Abalo were the only ones to convert their spot kicks for Aali. In Busaiteen’s triumph, scoring for their side were Mahmood Abdulrahman and Yatme Cheghrane, while Um Al Hassam’s lone consolation was fired in by Abdulla Zaied Salah.

Meanwhile, the first round of games continues tonight. Etehad Al Reef lock horns with Tadhamun while Bouri face Galali. The winner between the Etehad Al Reef-Tadhamun clash will move on to play Al Ettihad in round two, while the Bouri-Galali victor next take on Sitra.

Al Khaldiya are the holders of HM the King’s Cup after winning last year’s final against East Riffa on penalties. Both sides have byes from the opening two stages. The HM the King’s Cup football tournament is a knockout competition that is the richest in Bahrain.