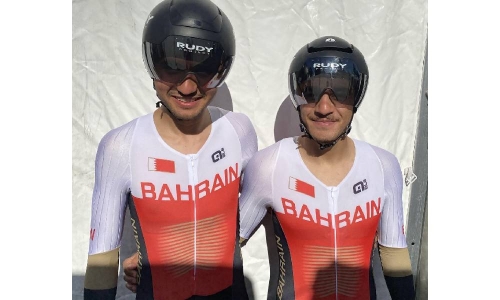 Madan and Naser are making an historic debut at the prestigious road cycling event, which has been organised by the sport’s global governing body the Union Cycliste Internationale (UCI).

The Bahraini pair are among more than 1,000 riders from over 70 countries taking part in the meeting’s various categories.

Aside from the men’s under-23 class, there are also road races and time trials for elite men, elite women, junior men, junior women, and a mixed relay time trial.

Both Madan and Naser put in a brave effort in their solo performances, which covered a 28.8-kilometre distance along a course that featured several technical turns and a searing final sprint in the Wollongong city centre.

Madan was ranked an impressive 32nd amongst the 44 competing riders from all corners of the globe. He finished with a total time of 39 minutes 08.59 seconds, which was 4:55.19 behind first place.

Soren Waerenskjold of Norway was crowned world champion in a time of 34:13.40, while Alec Segaert of Belgium won the silver medal 16.34 seconds behind. Leo Hayter from the UK completed the podium 24.16s from Waerenskjold.

Meanwhile, either Madan or Naser will also be competing in the 169.8km men’s under-23 road race, which is scheduled for Friday. The event’s route will take the riders through the Wollongong city centre and along a number of local suburbs, and it includes a steady ascent with an average gradient of 7.7 per cent and a maximum of 14 per cent to reach a maximum elevation of 119 metres.