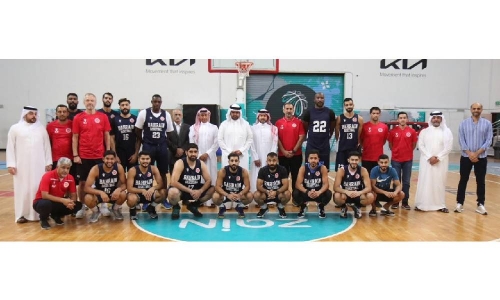 The nationals are gearing up for the start of the second round of Asian qualification for the FIBA Basketball World Cup 2023. Joining HH Shaikh Isa were Bahrain Basketball Association president Captain Waleed Al Alawi and other BBA officials.

HH Shaikh Isa encouraged the team to continue their impressive run in the World Cup qualifiers. The Bahrainis are in Group F of this stage of qualifying, alongside basketball powerhouses Australia, China, Japan and Kazakhstan.

The nationals play their first game against the Aussies at home on August 25 at the Khalifa Sports City arena in Isa Town. They then travel to Astana in Kazakhstan to take on China just four days later on August 29.

Following their upcoming games, the Bahrainis then host Japan on November 11 before also taking on China in the Kingdom on November 14. The nationals then travel to Australia for their away game on February 23, before playing in Japan on February 26.

The 12 remaining teams in qualifying have been divided into two groups for this round. Group E features New Zealand, Lebanon, Jordan, Philippines, Saudi Arabia and India. The top three teams from each group, along with hosts Japan and the Philippines, qualify for next year’s World Cup.

‘I am here to kill the queen,’ Windsor Castle intruder says