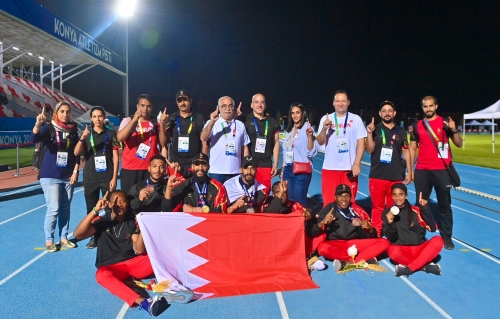 Bahrain picked up five more medals, including two gold, yesterday on the final day of the athletics competition at the fifth Islamic Solidarity Games being held in Konya, Turkey.

The five-medal haul brought Bahrain’s medal tally to date at the Games to 20, including nine gold medals, seven silver and four bronze medals. All but one of Bahrain’s total medal haul has been won in athletics.

The other was claimed by Ahmed Madan in road cycling, with the history-making Team Bahrain Victorious rider claiming the men’s individual time trial gold medal. In yesterday’s athletics events, Winfred won the women’s 1,500m gold medal in a time of four minutes 14.35 seconds.

It was the second title for Winfred at the Games, having also clinched the women’s 3,000m steeplechase gold medal.

Meanwhile, the women’s 4x400m relay team clinched their gold medal after winning in 3:35.24. In the men’s 4x100m relay, Yaqoob Salem, Abdulraof Rashid, Ebrahim Simon and Saeed Alkhaldi.won their silver medal after completing their race in 39.01 seconds.

The Kingdom’s quartet included Musa Isah, Abbas Ali, Ali Khamis and Husain Aldoseri. With yesterday’s events, Bahrain’s men and women athletes wrapped up their participation on the track and in the field.

Attending the final day of the athletics competition was Bahrain Olympic Committee secretary general Faris Al Kooheji, who presented some of the winners with their respective medals. The BOC secretary general also met with his Uzbek counterpart Oybek Kasimov on the sidelines of events.

The pair discussed ways of further cooperation between the two Olympic committees, including developing joint-programmes in wrestling, boxing and judo. Elsewhere yesterday, Bahrain Cycling Association president Shaikh Khalid bin Hamad Al Khalifa expressed his sincere congratulations to the Kingdom’s wise leadership on the success of Madan in the individual time trial. In shooting yesterday at the Games, Bahrain was taking part but were not able to ascend onto the podium.