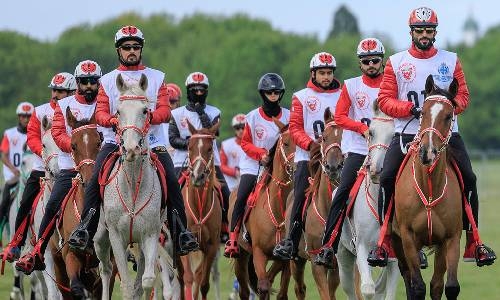 The team will also take part in other races, including the 120 km race for the public, the 120 km race for juniors and the 100 km race. HH Shaikh Nasser has followed, in the presence of HH Shaikh Faisal bin Rashid Al Khalifa, Vice President of the Supreme Council for the Environment, Deputy Chairman of the High Authority of the Rashid Equestrian and Horse Racing Club and member of the Supreme Council for Youth and Sports, the veterinary examination of the Windsor Equestrian Championship, which will witness the participation of the HH Shaikh Nasser-led Royal Endurance team.

On this occasion, HH Shaikh Nasser bin Hamad Al Khalifa stressed that the Windsor Equestrian Championship is one of the most important annual competitions in which the Royal Endurance team participates, highlighting the fierce competition it features year-in, year-out.

“We are eyeing top places in this edition as well as to meet the objectives we set out for participating in this event. Achieving positive results will confirm the high position of the Bahraini endurance sport and its development in the bright era of HM King Hamad bin Isa Al Khalifa, the King of the Kingdom of Bahrain.

We have reached these levels in this sport thanks to the interest and follow-up of HRH Prince Salman bin Hamad Al Khalifa, Crown Prince and Prime Minister.” His Highness Shaikh Nasser bin Hamad Al Khalifa indicated that the Kingdom of Bahrain has strong and historical deep-rooted relations with Britain that are still developing and flourishing thanks to the interest and vision of HM the King, adding that this key element has contributed to strengthening the team’s desire to leave a positive impact in this prestigious event.

“This is one of the main events in our calendar of abroad contests. We relish the opportunity to take part in Windsor Equestrian Championship to meet various objectives as well as to make various successes and positive results,” HH Shaikh Nasser explained.