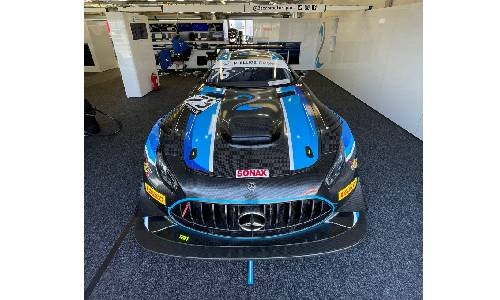 The 2 Seas Motorsport pair of Jonny Adam and Flick Haigh topped the timesheet yesterday in the first hour-long test session of the Silverstone round in the 2022 Intelligent Money British GT Championship.

Adam clocked a fastest time of one minute 58.952 seconds while behind the wheel of the team’s Mercedes-AMG GT3 car in 17 laps of work. It was a brilliant start to the weekend for the Bahraini-British racing outfit, particularly for Adam and Flick in their newly liveried #75 car.

They were the 2018 series champions, and they are reuniting this weekend for the first time since they took the title. Adam and Flick are joining 2 Seas for select rounds of this season, starting in Silverstone before also competing in Snetterton in June and Brands Hatch in September.

Meanwhile, their 2 Seas teammates James Cottingham and Lewis Williamson in the 2 Seas #4 Mercedes-AMG GT3 also had a fine start, finishing the test session not far behind in third place. They posted a best lap of 1:59.053, going just 0.096 seconds off the leaders’ pace.

The field now heads to its main two days of the meeting today. There will be two free practices held in the morning, followed by a pair of qualifying sessions in the afternoon. The race, which will mark the third round of the season, will then be held tomorrow, scheduled for a 1.30pm start, Bahrain time.