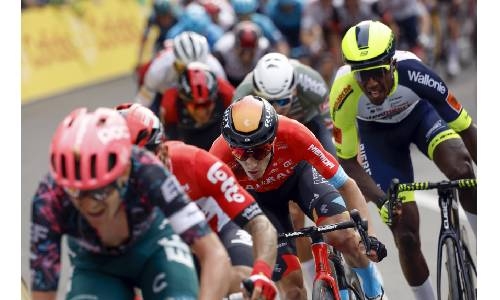 Team Bahrain Victorious rider Pello Bilbao finished an impressive third yesterday in the first stage of the 2022 Giro d’Italia. The race is the first of three Grand Tours in this season’s Union Cycliste Internationale World Tour.

It is the 105th edition of the prestigious event, which will cover a total of 3,445.6km and 50,580 vertical metres across 21 stages before finishing in Verona, Italy on May 29. Yesterday’s opening leg covered a distance of 195 kilometres and it started at the Hungarian capital of Budapest before finishing in Visegrad.

Bilbao narrowly missed out on the victory and finished narrowly behind winner Mathieu van der Poel of Alpecin-Fenix team and Biniam Ghirmay of Intermarche-Wanty-Gobert Materiaux. After completing the stage, Bilbao commented: “It was a strange feeling in the beginning—the stage was going quite easy so I didn’t know how I was going to feel in the last part.

“In the last 30km, I went full intention. I knew that today would be a good day for me. “It’s a good way to start the Giro.” The Giro d’Italia continues today with the second stage, which is a 9.2-kilometre individual time trial in Budapest. A Grand Tour event is a road cycling race that is one of the three major European professional stage races. They include the Giro d’Italia, the Tour de France and the Vuelta a Espana.