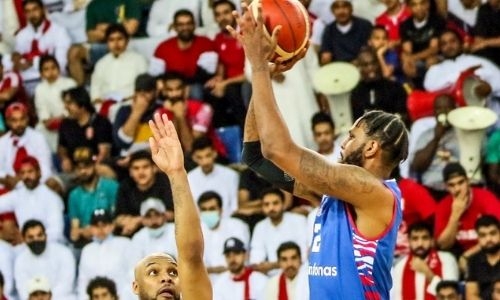 Muharraq pulled off a stunning, come-frombehind 96-94 victory over arch-rivals Manama last night to take a 1-0 lead in the best-of-three championship series of the 2021/2022 Zain Bahrain Basketball League. The victors fell behind by as many as 11 points in the second half, but a late flurry helped them capture the win in dramatic fashion in front of a packed crowd at the Khalifa Sports City Arena in Isa Town. Hussain Shaker buried backto-back three-pointers that put Muharraq in the lead for good with just over a minute to play.

Dewayne Jackson and Bader Abdulla Malabes then each had a pair of pressure-packed charity shots that helped Muharraq seal the final result. Muharraq are now one victory away from securing the coveted title. They will hope to close things out in game two on Friday, while game three, if needed, will take place on Monday. Muharraq are looking to secure their fourth league crown. Their last triumph came in the 2018/2019 season.

Manama are hoping to extend the finals series in their quest to add to their record 21 league championships. They last won the title in the 2017/2018 campaign. Three Muharraq players scored over 20 points in the contest to help spearhead them to the win. Americans Sammy Monroe and Jackson had 23 and 22 points, respectively, while Malabes added 20.

They were all on fire from beyond the arc, with Jackson and Malabes each making four three-pointers in the game, with Monroe converting three. Shaker finished with 10 points, as did Baqer Isa, who provided a spark off the bench. For Manama, Devin Ebanks was their top scorer with 25 while fellow-American Davion Berry had 22. Hasan Nowrooz added 18 and Ahmed Salman had 13. Both teams virtually matched each other in the first period, with Jackson giving Muharraq a slim 26-25 advantage with a three-pointer that beat the quarter buzzer.

A Malabes lay-up put Muharraq up 32-27 early in the second, but Manama closed the period strong and went ahead 55-46 at the half. Manama managed to maintain their lead in the third and were ahead 73-63 heading into the final canto. There, Muharraq put in a furious comeback, despite falling behind by as many as eight points.

A driving lay-up by Isa brought them to within 85-90, and then Shaker made one of two free-throws to cut the deficit to four. That set the stage for his endgame heroics. He first connected with a three to bring Muharraq to within one, before burying another in the face of his defender to give his team the 92-90 edge with just over a minute to play. Following a Nowrooz turnover, Jackson made two pressure-packed free-throws, and then Malabes also had a pair of charities after an Ebanks basket. Ebanks pegged the final score with a put-back at the buzzer, but it made no difference.