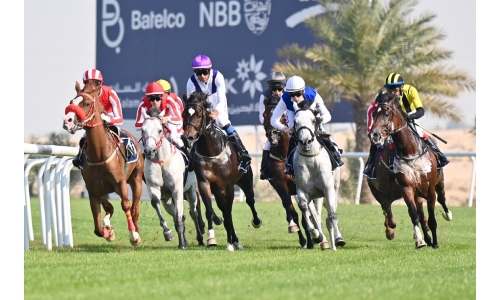 Another stellar cast of international contenders are set to line-up along the starting gates for the Bahrain Turf Series tomorrow at Rashid Equestrian and Horseracing Club (REHC) in Sakhir. The fifth race of the 10 £50,000 handicaps will see 13 horses vie for the Al Riffa Cup.

The event will be race five on tomorrow’s exciting eight-race card, and it will be held over 10 furlongs.

Mars Landing has already won two of the four Bahrain Turf Series races held, having claimed back-to-back wins with the Al Muharraq Cup in the second race and then the Al Dana Cup in the third.

Trained by Hesham Al Haddad and to be saddled by Neil Callan, the five-year-old horse will be looking to complete a hat-trick midway through the series but will face some tough competition from the rest of the field. Medal Winner, trained by Hussain Aldailami, is to be ridden by Paddy Mathers, while Magical Wish, who was the runner-up in the Al Dana Cup, is trained by JS Moore and is to be jockeyed by John Egan.

Three Victorious-owned horses are also in the fray, all trained by Hesham Al Haddad.

They include Macaque, to be ridden by Husain Makki; Classical Wave, to be saddled by Lee Newman; and Tawaareq, to be ridden by last year’s winning jockey in the Bahrain International Trophy David Egan.

Some of the other horses expected to make a challenge are Pistoletto, owned by JA Thompson and Stephen Russel, trained by John Ryan and to be saddled by Darragh Keenan; Arqoob, the runner-up in the Al Muharraq Cup, competing for Little Staughton Farms, trained by William Jarvis and to be ridden by Kieran Shoemark; Howzer Black, a three-time winner over 2,000m, representing Middleham Park Racing, trained bey Keith Dalgleish and to be ridden by George Wood; and George Baker-trained Dawaam, to be ridden by Abdulla Faisal.

Also on tomorrow’s race card, the Bahrain Jewellery Centre Cup with a BD3,000 prize will be up for grabs in the day’s eighth and final event, with Riffaa Wonder, Graphite Storm and Al Fajir Mukbile tipped with a chance.

Another Bahrain Jewellery Centre Cup is to be won in the fourth race, with Sabreena, Immortal and Campolina dubbed as pre-race favourites to battle for the lion’s share of the BD3,000 prize purse.

Three Porsche Cups are to be won in races seven, six and two, each carrying a BD2,000 prize purse; while in the first race of the day, the Fatees Al Hajeri Cup with a BD1,500 purse will be contested, and those tipped with a chance are Al Ma’anagieh 1789, Al Jellabieh 1752 and Al Krush 1823.

Bahrain ProAm 1,000 moved to next year