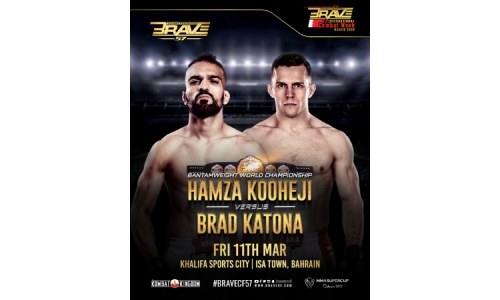 A new Bantamweight World Champion will be crowned when BRAVE Combat Federation returns to the beautiful Kingdom of Bahrain for the highly-anticipated BRAVE International Combat Week.

Both men will arrive at the iconic Khalifa Sports City Arena in Isa Town, Bahrain on the back of their outstanding win streaks, which earned each of them a shot at the vacant World Title.

Kooheji is a legend of Bahrain martial arts, featuring a skillset that includes pinpointing striking and solid technical grappling.

In addition, he owns victories over the best fighters in the Middle East and Southeast Asia, including Jeremy Pacatiw, Mohammad Farhad, Crisanto Pitpitunge and Nahuel Gandolfi.

In his return to the BRAVE CF cage, the 28-year-old Bahraini will face a stern challenge from one of the promotion’s bluechip recruits from last year in the form of Katona.

Katona struck a golden opportunity when he signed an exclusive multi-fight contract with BRAVE CF in 2021, offering him a chance to restore his meteoric rise in the sport.

“Superman” was nothing short of impressive in his promotional debut, submitting previously-unbeaten Serbian Borislav Nikolic with a guillotine choke in the third round at BRAVE CF 50 in April 2021.

He then followed it up with a unanimous decision triumph against Russia’s Bair Shtepin four months later.

More bouts for BRAVE CF 57 will be announced in the days to come as the Kooheji vs. Katona duel will be one of the three World Title encounters to be slated at the organization’s first major event for 2022.

BRAVE CF 57 will take place during the 2022 edition of the BRAVE International Combat Week, which will also feature the epic first edition of the MMA Super Cup, the largest amateur tournament in the world in association with IMMAF, KHK Sports, and the Bahrain MMA Federation.