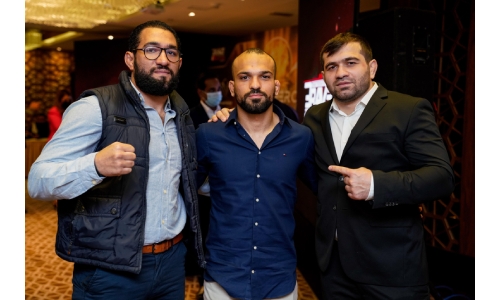 Staying committed to its promise of bringing the sport of mixed martial arts to greater heights, BRAVE Combat Federation recently announced the creation of the MMA Super Cup intending to highlight new and upcoming talent from the amateur circuit.

In cooperation with the International Mixed Martial Arts Federation (IMMAF), the announcement was made last Monday, January 10 during a press conference for the opening of the BRAVE International Combat Week at the Wyndham Garden Hotel in Manama, Bahrain.

To qualify for the aforementioned tourney, teams must be ranked in the Top 6 of the senior world rankings after the conclusion of the IMMAF World Championships, with two wild card teams to be included.

The teams who are set to take part in the single-elimination tournament are as follows: Russia, Ukraine, Bahrain, Kazakhstan, Ireland, Tajikistan, Balkan Champions and Arab Champions--the latter two being the wild cards.

Each team will consist of 12 fighters (seven male, two female, two male substitutes, and one female substitute) – one fighter per division, and two coaches.

Once the teams have been drawn, there will be nine bouts between two teams with each fight consisting of three, three-minute rounds wherein no draws will be allowed.

The team with more wins after all nine fights will advance to the next round.

Whoever wins the entire tournament brings home the MMA Super Cup trophy and a $100,000 check, while the runner-up takes $75,000 and the winner of the third-place match gets $50,000; the largest prize pool put together for an amateur competition.

Members of the international MMA community had a lot to say about the MMA Super Cup, which will run from March 7 to 12.

On the same social media platform, sports journalist John Reese reckoned that there “will be opportunities” for the winners of the tournament to be signed by BRAVE CF.

Meanwhile, MMA writer Tudor Leonte is crossing his fingers that “the global situation will improve” by March as the COVID-19 pandemic still lingers in many countries.

On the other hand, Filipino blogger Conan Altatis hopes that MMA Super Cup will “help” IMMAF’s bid “to make MMA an Olympic sport.”