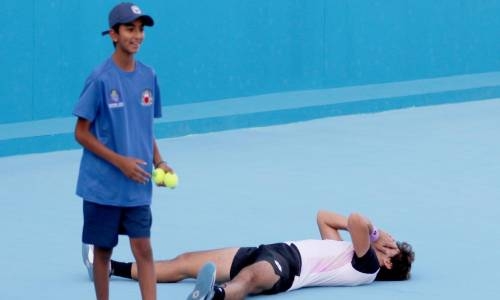 Austria’s Maximilian Neuchrist and his partner Michail Pervolarakis of Greece extended their impressive run in the men’s doubles event of the ATP Tennis Challenger, being held at the Public Security’s Officers Club courts in Gudaibiya.

In their neck-and-neck semi-final tie against the fourth-seed Indian tandem of Arjun Kadhe and Ramkumar Ramanathan last night, Neuchrist and Pervolarakis put on a superb show to pick up a well-deserved victory and a place in the title match.

The winning tandem are now set for their final, scheduled for today, against the Portuguese pair of Nuno Borges and Francisco Cabral who edged third seed N. Sriram Balaji and Divij Sharan 6-4, 6-4 in another interesting tie late on. Borges and his compatriot Cabral proved the stronger side of this action-packed three-set match to ensure themselves a place in the competition’s finale.

In the singles event, the last eight men battled it out for the final four places as Yanki Erel of Turkey put on a spirited performance to clinch a come-from behind 2-1 win over his Briton opponent Ryan Peniston. Sets scores were (2-6, 6-3, 7-5).

The 21-year-old wild-card Turkish will now face Evgeny Karlovskiy of Russia, who was in superb form as he picked up a 7-6’5’, 6-3 win over Portuguese Nuno Borges.

“It was really a tough match and I am so happy that I made it this far,” said Erel after the victory. “This is my first challenger main draw actually, I am not playing a lot of challengers tournament and I hope I can play more in these events in the future,” said the unseeded Erel.­­