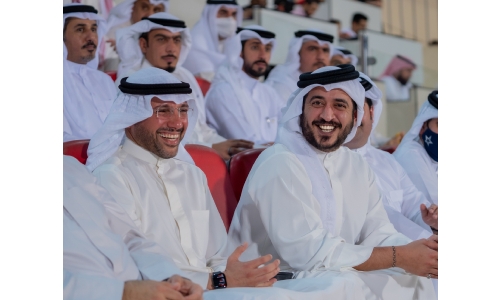 HH Shaikh Khalid bin Hamad Al Khalifa, First Deputy President of the Supreme Council for Youth and Sports, President of the General Sports Authority and President of the Bahrain Olympic Committee, praised the great display of the Muharraq in the semifinal of the AFC Cup against Kuwait Club, which reflected the strong preparations undertaken by the team’s players who were equipped with high spirit to achieve victory and qualify for the final game.

HH Shaikh Khalid wished the team could repeat its 2008 successes when they lifted the cup of this competition.

HH Shaikh Khalid also praised the massive turn-up for the game, underlining that the fans played a key part in this victory.

His Highness said: “We are pleased with what we witnessed throughout the match from our national representative; the Muharraq Club.

This well-earned victory hopefully will inspire the team to win the final match too,”