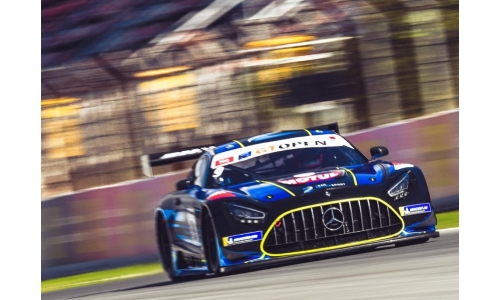 Bahraini-British motor racing team 2 Seas Motorsport wrapped up their European season yesterday by taking a solid seventh place in the second race of the final round in the International GT Open, held at the Circuit de Barcelona-Catalunya.

After clinching first place in the weekend’s first race on Saturday, the pair of Martin Kodric and Ethan Simioni shared the duties once more in the team’s #9 Mercedes-AMG GT3 car.

They had qualified sixth earlier in the day with a best lap time of one minute 43.762 seconds. They then had a strong drive over the 60-minute event where they completed 33 laps and crossed the chequered flag 23.247 seconds behind winners and pole-sitters Inception Racing.

The results in Barcelona mirrored that of 2 Seas’ fine showing in the previous round in Monza, Italy held last month, where they also won race one. 2 Seas Motorsport co-owner His Highness Shaikh Isa bin Abdulla Al Khalifa commented after yesterday’s event:

“I am hugely proud of the results we have achieved here this weekend, and the efforts by the whole team.

Another great drive by Ethan and Martin, and another strong race performance against some really strong competition.

“We have worked hard to put together a team which can put up a real challenge, and shown that we have what it takes to battle with the best. It is great to sign off this programme with another trophy, and it is a reward for the huge amount of work that the team has put in over a busy year.

“We are still building our knowledge, and we become stronger after every session.

We will now regroup and focus on the next challenge, which we hope to confirm soon.”