2 Seas triumph in Barcelona | THE DAILY TRIBUNE | KINGDOM OF BAHRAIN 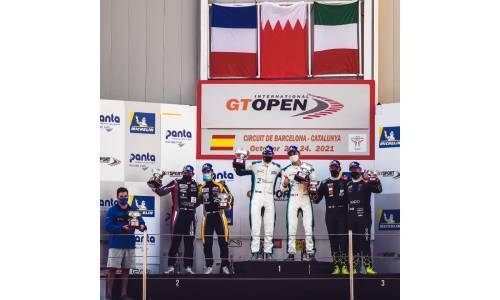 Bahraini-British racing team 2 Seas Motorsport powered to an impressive victory yesterday in race one of the final round of this year’s International GT Open.

The event is being held at Circuit de Barcelona-Catalunya in Spain, and it marked the second successive meeting in the championship that 2 Seas were able to claim a race victory, after also winning race one of the previous round held last month in Monza, Italy.

2 Seas’ Croatian driver Martin Kodric put in a great opening stint yesterday in the team’s #9 Mercedes AMG-GT3 after starting from the second row on the grid in third.

A clockwork stop by the pit crew then put Ethan Simioni in prime position to take the win in the final stint.

The Canadian ace had a flawless drive that saw him lead to the end before the chequered flag was waved under safety car conditions.

“Another amazing effort by the whole team to take the victory against such a strong field,” said Simioni after the race.

“Martin did a great job in the opening stint, and the team were perfect with the pitstop to give me the car in the best possible position.

We have worked hard to get to this point, and it is great to be able to bring the car home for another victory and to pick up where we left off in Italy.

“I am looking forward to seeing what we can achieve tomorrow in race two and we will keep pushing to end the season on a high.”

They were just 0.552 seconds off the pole-sitting pace of the AKKA ASP team.

The weekend’s action continues today with the second qualifying at 10 am Bahrain time, which will set the grid positions for the weekend’s second race, which begins at 2.25 pm, Bahrain time.

It will be held for over 60 minutes.

The team enjoyed a strong weekend last month in Monza, making their European race debut with both Kodric and Simioni teaming up.

In changeable conditions, Kodric made his successful series return while Simioni made the perfect start to his GT3 career.

The Pro line-up took a win in the first of the two races, and they now are taking on the Spanish track for overall honours as they continue to build valuable knowledge and experience with the new Mercedes racer.

Earlier this week, 2 Seas Motorsport co-owner His Highness Shaikh Isa bin Abdulla Al Khalifa commented: “The GT Open championship was great to be a part of over the Monza weekend.

“We enjoyed a strong weekend last time out, Ethan and Martin formed a very strong partnership, and the team continues to get stronger with each activity.

“We have been testing extensively lately, and I am pleased to see the hard work and dedication paying off with the biggest challenge last time out.”