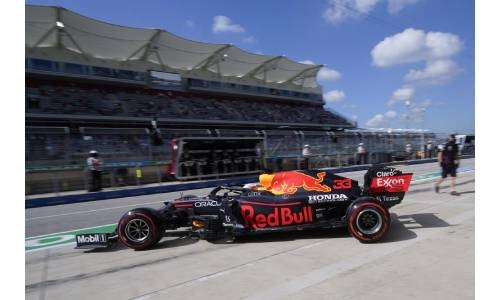 Road rage bubbled as the track temperature rose in the second practice session for United States Grand Prix on Friday as Max Verstappen called title rival Lewis Hamilton a “stupid idiot”. World champion Hamilton angered Verstappen by pushing past on the inside of the Red Bull when the Dutchman was lining up a flying lap.

Verstappen leads Hamilton by six points in the title race.

After the Mercedes almost pushed Verstappen off the track, the Dutchman gave way, lifting his right hand off the wheel to make a gesture with his middle finger at the rear end of Hamilton’s car.

Verstappen complained about team radio that Hamilton was a “stupid idiot” and never seemed to recover his poise, ending the session eighth fastest.

“They were queuing up to start the lap and Lewis decided just to jump Max there,” Horner told UK Sky TV from the pit lane.

“They have an unwritten rule in sessions like this that they take their turns and Max was pointing out that he was first in the queue.”

Verstappen never found a gap in traffic to make another attempt.

“Why do we always go in traffic.

He was not the only angry driver. Nikita Mazepin was almost sideswiped by a driver exiting the pits.

“What was that man? Just avoided a crash,” said the Russian.

“Man it’s impossible to get a lap on this track.”

After the session, with his helmet off but his mask on, Verstappen was more guarded.

“Just a mess with the traffic,” he said before addressing the Hamilton incident in a bewildered tone.

“We’re all lining up to go for our laps so I don’t understand what happened there.”

Yet the afternoon was not a total loss for his team, which had been badly outpaced by Mercedes in the morning.

Lando Norris of McLaren was second 0.257sec behind. Hamilton who had what would have been the fastest time of the session scrubbed out because he crossed the white track limits line on turn 19, was third 0.364, 0.50sec ahead of teammate Valtteri Bottas. Daniel Ricciardo of McLaren, Lance Stroll in an Aston Martin and Ferrari’s Charles Leclerc were the next three fastest, ahead of Verstappen.

“It’s going to be very tight trying to put it all together and find those couple of tenths that would put us in the mix for pole tomorrow.”

Perez said the real problem was not the heat, which reached the mid-80s Fahrenheit.

“My hands are sticking to the wheel a lot.”

Mercedes dominated in the morning and Hamilton said changes the team made between sessions had not worked. “We lost some ground or they gained some ground,” he said.

Bottas faces a grid penalty on Sunday after Mercedes changed his engine for the fifth time this season.