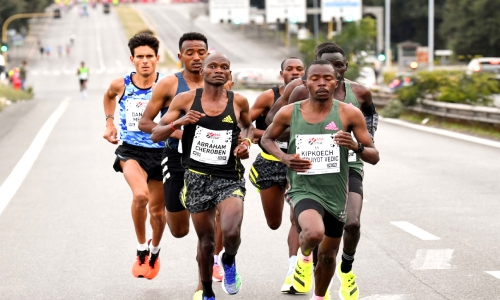 Bahrain’s elite dis - tance-running specialist Abraham Cheroben finished a solid fourth in the men’s race at the RomaOstia Half Marathon in Rome on Sunday.

The 29-year-old Asian and Bahraini half marathon record-holder was one of more than 20 competitors from all over the world in the event, which is part of this year’s World Athletics Label Road Races.

Cheroben was among a fiveman leading group for much of the race with Abdera Adisa Tola of Ethiopia, Kipkoech Cheruiyot of Kenya, Maxwell Mbuleli Mathanga from South Africa, and Daniele Meucci from Italy.

They went through the first five kilometres in 14 minutes 23 seconds, 10km in 28:30 and 15km in 42:51. Towards the end, however, Cheroben could not keep up with the top three who separated themselves from the pack.

Cheroben’s time was far from his personal best of 58:40, which remains the Asian and Bahraini record in the half-marathon that he set in 2017 in Copenhagen.