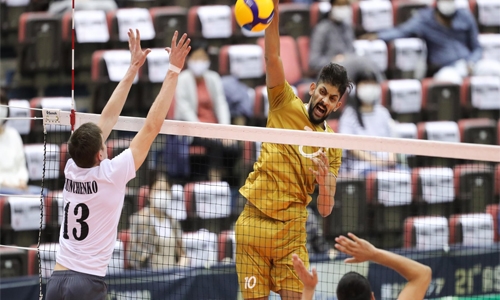 Bahrain continued their winning ways in the classification round of the 21st Asian Senior Men’s Volleyball Championship in Japan yesterday after taking a hard-earned 3-1 (16-25, 25- 23, 28-26, 25-22) victory over Kazakhstan.

The game was part of the battle for ninth-to-12th rankings in the competition and the Bahrainis are now set to play for ninth place overall on the final standings.

The Kazakhs and Saudis will play for 11th place.

Bahrain’s game with India will be a re-match of their preliminary round contest, which the Bahrainis won in straight sets. In Bahrain’s win yesterday, the nationals fell behind in the first set but did well to fight back in the contest.

They eked out a gutsy win on set four to take the crucial 2-1 advantage and then managed to close things out in the fourth. Ali Ebrahim was in fine form, scoring 22 points, including 21 attacks, to lead Bahrain.

Nasser Anan also had a big contribution of 18 points, 15 of which came in attack with two service aces.

Vitaliy Vorivodin scored a match-high 24, including 21 attacks and 2 blocks, in Kazakhstan’s losing effort.

The bronze and gold medal games are also scheduled to take place today. Hosts Japan will take on defending champions Iran for the tournament title, while China will battle Chinese Taipei for the bronze medals.

By booking their tickets to the final, Japan and Iran also secured their berths in the 2022 FIVB Volleyball Men’s World Championship as Asian representatives.

This year’s championship is Bahrain’s 10th participation in the continent’s leading event.

The nationals first competed in 1979 as hosts, and last appeared in 2015 when they finished 12th. Bahrain’s best classification was eighth, which they achieved in the 1987 edition