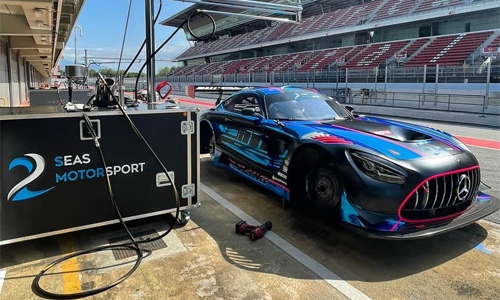 Bahraini-British motor racing team 2 Seas Motorsport are set to make their European race debut next week in round six of the International GT Open championship.

The event will be held at the Autodromo Nazionale Monza in Italy, over the weekend of 26-27 September.

Set to suit up for the team are Martin Kodric and new team member Ethan Simioni at the wheel of 2 Seas’ Mercedes-AMG GT3.

2 Seas Motorsport co-owner and driver His Highness Shaikh Isa bin Abdulla Al Khalifa commented: “The plan for 2021 was always to select specific events as we build up knowledge and experience with the Mercedes-AMG while looking at the options available in terms of championships and work with different drivers.

“We have enjoyed strong results in the events we have taken part in so far, and looking forward to this next challenge competing at Monza.

It is one of the proper old-school circuits, which always delivers great racing, and the International GT Open championship has an increasingly strong grid of teams and drivers, so it will be a great weekend to be involved with.

“The season has provided some great racing so far, and I am looking forward to seeing what we can achieve with the exciting lineup we have in Ethan and Martin.”

Simioni will be making his European debut in the GT3 category.

The young Canadian campaigned successfully in the GT competition on home soil after progressing from karting.

“I am pleased to be able to confirm that I will be joining 2 Seas Motorsport for the International GT Open event, and I cannot wait to race at Monza,” he was quoted as saying.

Kodric is returning with 2 Seas Motorsport having already scored victories with the team in both the Middle East and the UK so far this season.

The Croatian driver will be racing in the International GT Open and Monza for the first time since 2018, where he scored the victory to clinch third in the championship.

The 2021 season has proven to be successful for 2 Seas Motorsport so far, having achieved pole positions and race victories at both the Gulf 12 Hours Bahrain and the one-off Intelligent Money British GT entry at Silverstone.