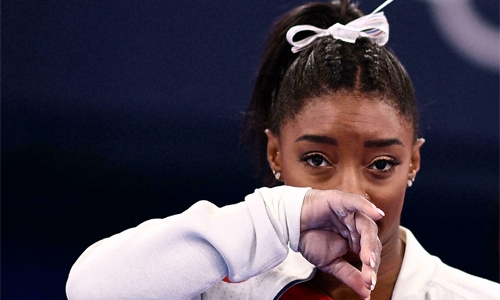 Simone Biles has pulled out of two more Olympic finals at the Tokyo Games, USA Gymnastics said in a statement on Saturday, with her entire campaign now in serious doubt.

That left Biles, who won four gold medals at the 2016 Rio Games, with a potential four more medal events in Tokyo, but she pulled out of two of those on Saturday.

"After further consultation with medical staff, Simone Biles has decided to withdraw from the event finals for vault and the uneven bars," the USAG statement said.

"She will continue to be evaluated daily to determine whether to compete in the finals for floor exercise and balance beam."

Biles said on Friday she was struggling with the "twisties", the mental block that has sidelined her in Tokyo.

The US federation said MyKayla Skinner would compete in the vault finals alongside Jade Carey.

"We remain in awe of Simone, who continues to handle this situation with courage and grace, and all of the athletes who have stepped up during these unexpected circumstances," the statement said.

Biles posted a video on Instagram on Friday of her landing on her back in training, on cushioned pads, and wrote that she was having problems "literally on every event, which sucks".

She said previous bouts of 'twisties' had taken two or more weeks to pass, but there was "honestly no telling (the) time frame".

Biles, who was bombarded with messages of support after her earlier pull-outs, also hit back at critics, saying: "For anyone saying I quit, I didn't quit. My mind and body are simply not in sync as you can see here."

Biles won a silver medal in the women's team event because she started the final.