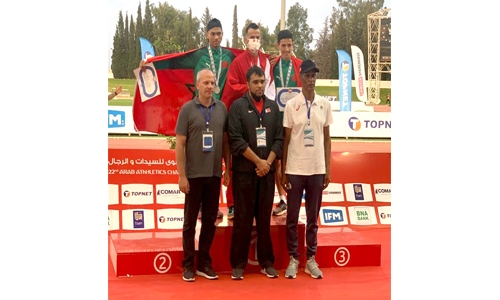 Bahrain added another two medals yesterday, including one gold, to their already impressive tally in the 22nd Arab Athletics Championships, being held in Tunisia.

On the second of the five-day meeting, Bahrain’s Al Siddique Mikho clinched the title in the men’s 1,500 metres, while compatriot Abraham Rotich narrowly missed out on the podium after finishing fourth in the same race. Meanwhile, Bahraini Manal Albahrawi captured the silver medal in the women’s 800m.

She had originally finished third in her race but was later promoted to the runner-up spot. The results were confirmed last night by the Bahrain Athletics Association.

The two medals brought Bahrain’s two-day count to six, including three gold and three silver medals. On day one, Abdelrahman Mahmoud clinched first place in the men’s shot put, while Dawit Fikadu was the top man in the men’s 10,000 metres. The Bahrainis added another two silver medals that day, with Abdulnasser Almy finishing behind Fikadu in their 10,000m race, and Tigist Gashaw classified second in the women’s 5,000m.

With their two-day total, the Bahrainis continue to battle for first place on the medal table. They are competing in the meeting with a 14-athlete team.

The Bahrainis were the overall winners in the previous championship held in Egypt in 2019. They clinched a total of 24 medals then, including 15 gold, five silver and four bronze.