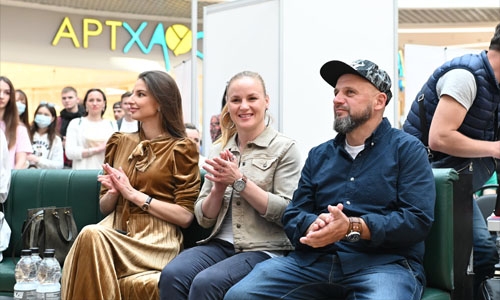 Valentina “ Bullet ” Shevchenko, who is universally recognized as the best women’s flyweight mixed martial artist in the world today, has nothing but good words to say about the visionary behind BRAVE Combat Federation.

The promotion is a brainchild of His Highness Shaikh Khalid bin Hamad Al Khalifa from the Kingdom of Bahrain, and it is now one of the organizations that have been responsible for elevating the sport into a mainstream staple outside North America.

Shevchenko was in attendance for BRAVE CF 51: THE FUTURE IS HERE, the company’s maiden show in Minsk, Belarus last June 4, as an honorary guest alongside Brazilian actor Caio Castro and football legend Alexander Hleb. The 33-year-old native of Bishkek, Kyrgyzstan revealed that she managed to have a tete-a-tete with the esteemed BRAVE CF founder and know more of his future plans during the week-long festivity in the Belarusian capital.

“We had a few minutes to discuss ideas like what things are going to be good for the future of mixed martial arts. That’s good. Being an athlete of the sport for so long and having that of conversation, it means a lot,” she said.

“I really enjoy when I see an event, like this one for example, when we see very experienced fighters and young prospects. We also see a fight featuring female fighters, and that’s very important. It’s a complete card.

You have everyone involved,” Shevchenko added. “It shows how MMA is starting to develop around the world.” BRAVE CF will be breaking new ground on August 1st for its 52nd show and 23rd visited nation as it is set to make its debut in Milan, Italy.