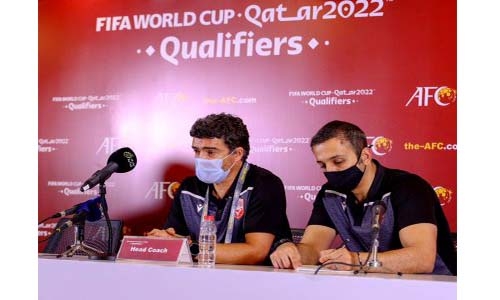 “If there is someone who should be disappointed, it would be me,” Sousa was quoted as saying on the-afc.com following the game. “We have built great confidence in our team and everyone believed in us to achieve victory, but we faced a difficult team.”

The Bahrainis are now in a precarious situation in Group C in their hopes of advancing in World Cup qualifying.

They dropped to third on the group table with 12 points, behind leaders Iraq who have 14 and Iran who are also on 12 but have a much superior goal difference.

The Bahrainis also have just one more match to play, while both Iraq and Iran have two games apiece, including one against each other.

Only the top team at the end of this group stage makes it through to the next World Cup qualifying round, while the runner-up must hope to be among the four best second-placers across all groups to go through.

“A draw would have been a better result for us rather than the defeat, of course; now, we must reach 15 points but our chances are slim because Iraq and Iran have two matches remaining,” Sousa admitted.

Of his analysis on Monday’s game, the Portuguese tactician said: “The strength of Iran was their ability to launch attacks from the middle and we should have not given the space to do what they want.

“Our opponents had good quality players, including the best player in the Russian Premier League [Sardar Azmoun] while they also have several players who play in top teams around Europe.

“We made good substitutions but the second goal that we conceded affected us a lot. We were hoping to have a better result but we failed to do so although we played with a lot of bravery.”

Azmoun scored twice for Iran in the match while the other goal was supplied by FC Porto striker Mehdi Taremi.

Bahrain’s last game will be against Hong Kong yesterday next week, the same evening that the Iraqis will face their Iranian counterparts.

Before that, on Friday, Iran takes on Cambodia while Iraq plays Hong Kong.