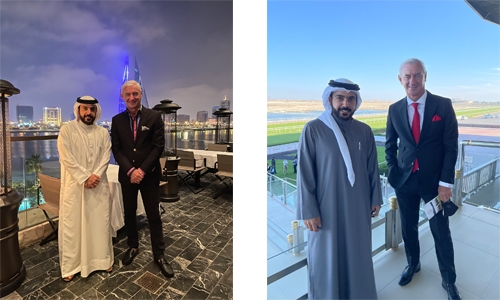 During his stay, the former Wales international forward and all-time leading goal scorer at English club Liverpool visited various locations across the Kingdom.

These included the British Club in Adliya and Rashid Equestrian Horseracing Club in Riffa to attend a horseracing meeting, to name a few.

“It was a great opportunity to learn about the Kingdom and was pleasantly surprised to see Liverpool fans who have been supporting the football club since the ’70s and ’80s.”

He scored a total of 346 goals in all competitions at the club, earning him the tag of being one of Liverpool’s greatest players.

Rush also competed for Italian giants Juventus, and English sides Leeds United and Newcastle United, among other clubs. He made 73 appearances for the Welsh national team and scored 28 goals.

Shaikh Ahmed is also the ex-director of Bahrain’s under-23 Olympic team and is a huge Liverpool fan.