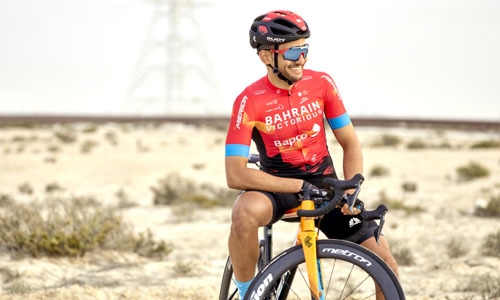 Representative of His Majesty the King for Humanitarian Work and Youth Affairs, HH Shaikh Nasser bin Hamad Al Khalifa, has recorded a new story of success in supporting the Bahraini youth by overseeing and training Bahraini cyclist Ahmed Madan who was able to join Team Bahrain Victorious as the first Professional Bahraini cyclist.

HH Shaikh Nasser’s keenness on providing every support to the Bahraini youth has enabled Ahmed Madan to take part within Team Bahrain Victorious in Hungary Tour, thus recording his first participation as a professional cyclist.

HH Shaikh Nasser bin Hamad Al Khalifa expressed great happiness over Madan’s ability to participate as a professional cyclist in external competitions. He described that as a source of pride for all and an assertion of the Bahraini cyclist’s successful march to reach set up goals.

Ahmed Madan expressed thanks and appreciation to HH Shaikh Nasser bin Hamad Al Khalifa for his great support and training to him to reach professionalism. He took pride in being part of Team Bahrain Victorious, pledging to spare no effort in future competitions.