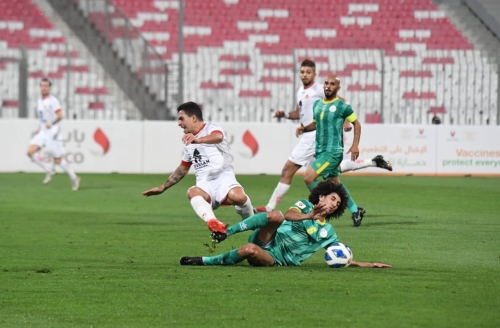 East Riffa kept their slim title hopes alive with a 2-0 victory over Malkiya last night in Week 16 of the 2020/2021 Nasser bin Hamad Bahrain Premier Football League. Bahrain national team players Sami Al Hussaini and Mohammed Al Rumaihi were on target on either side of half-time for the victors.

Al Rumaihi had a brace. With the result, East Riffa reduced the gap to four points from table-toppers and neighbours Riffa, but have played one match more. If Riffa wins today in their game against defending champions Hidd, they will clinch the title with two games still to play.

In East Riffa’s win, Al Hussaini opened the scoring for his team in the 13th minute. He headed in from close range off a cross from the right-wing by Brazilian Luiz Fernando Correa Sales.

Al Hussaini’s goal was enough to give East Riffa the lead heading into the interval. East Riffa then doubled their advantage in the 68th minute with Al Rumaihi’s first goal, which came on a rebound off a shot from Yuri Jesus Messias, also from Brazil. Al Rumaihi then applied the final nail in the coffin with an 83rd-minute penalty after teammate Faisal Budahoom was taken down in the box by Malkiya’s Salman Mohamed Salman.

Al Rumaihi made no mistake with his spot-kick, sending the ball to the bottom-left corner of goal. East Riffa came away with their 11th win in 16 matches as they improved to 34 points.

Malkiya suffered their eighth loss and stayed in the bottom half of the standings with 12 points. In other matches yesterday, Manama and Budaiya played to a goalless draw, ending Manama’s hopes of possibly challenging for the league title; while Al Najma were held to a 2-2 stalemate by the bottom club Busaiteen.

Manama remained third on the table with 30 points while Budaiya went to 13. Najma improved to 15 points while Busaiteen rose to 11 while remaining in the last place.

Hope fades for Indonesian missing submarine as US assists search