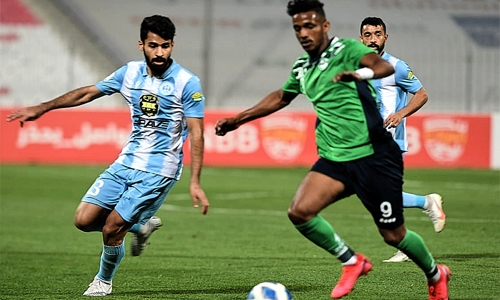 Mahdi Humaidan had a second-half brace for Riffa, who claimed their 11th win. Following a goalless first 45 minutes, Humaidan opened the scoring with a penalty in the 67th minute.

He sent the ball into the bottom-right corner of the net. Budaiya goalkeeper Mahmood Alajmi was able to get his hands on the shot, but it was too powerful to control and it put Riffa ahead.

Humaidan then assured his team of the full three points with a goal in the 92nd minute. Teammate Komail Alaswad had a left-footed attempt from just outside the penalty box parried by Alajmi, but the rebound went directly into the path of a quick-to-react Humaidan and he made no mistake with his one-touch, stoppage-time effort.

With the result, Riffa improved to 34 points atop the league standings, stretching the gap from their closest rivals Manama to 11 points. Budaiya, on the other hand, stayed amongst the bottom three teams with just 10 points, having suffered their seventh loss in 13 matches.

Meanwhile, also yesterday, Al Ahli and Malkiya played to a goalless draw. Ahli registered their fifth stalemate in 13 matches and improved to 14 points, while Malkiya were also dealt their fifth draw as they went to 11 points.