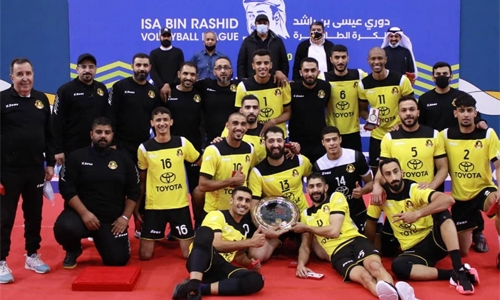 Al Ahli was last night crowned champions of the 2020/2021 Isa bin Rashid Bahrain First Division Volleyball League. Ahli claimed the title after a thrilling 3-1 (25-22, 24-26, 25-21, 26-24) victory over Muharraq, which earned them a two-game sweep of their best-of-three finals series. Following the match, which was played at the Bahrain Volleyball Association (BVA) arena at Isa Sports City in Riffa, both teams were presented their respective trophies and medals in a ceremony by BVA president Shaikh Ali bin Mohammed Al Khalifa.

Other BVA and club officials were also on hand.

As a result, Ahli claimed only their third title in the history of the league.

They last won in the 2017/2018 season, while their first championship came in 2014/2015. Ahli was able to avenge their loss against Muharraq in last season’s championship round, which they lost in two games.

The victors were also able to upset their highly favoured rivals, who were the top seeds at the end of the preliminary round.

In last night’s clash, all four sets were tightly contested as Ahli were looking to secure the title, but Muharraq were battling for their lives, with the hopes of sending the finals series to a winner-take-all third game.

Ahli were the aggressors from the beginning as they took the first set in a convincing fashion.

They appeared to be on their way to a two-set advantage late in the second but Muharraq were able to rally and tie the proceedings at 1-1 on a smash from Cameroon professional Yvan Arthur Kody Bitjaa.

It was a minor blip for Ahli in the contest as they were able to regroup in the third set and regain the match advantage. Then, in the fourth, they moved to the brink of securing the title at 24- 22, but Muharraq were able to score the next two points, which included a Mohammed Anan error that tied it at 24-all.

But that set the stage for Ahli’s title-clinchers, both of which were sent home by skipper Ali Al Sairifi at the net. Ahli also had key contributions in their win from Brazilian import Luis Fernando Venceslau, and their other top Bahraini talents including Nasser Anan, Abbas Al Khabaaz, Ali Marhoon, Ali Sairifi, Ali Habib and libero Ayman Haroona.